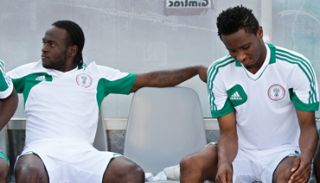 Both players are in the United States with Chelsea this week for friendlies against Manchester City in St Louis and New York.

Moses would miss World Cup qualifiers in Kenya and Namibia on June 5 and June 12 plus the Confederations Cup in Brazil from June 15-30 as the forward sought treatment on recurring hamstring and ankle injuries, said team co-ordinator Emmanuel Attah from Germany where the rest of the Nigeria squad are training.

Midfielder Obi Mikel had asked to be excused from the African champions' friendly against Mexico in Houston on May 31, saying he wanted to rest after a long season in England, but would be available for the matches in June.

Nigeria top African qualifying Group F for next year's World Cup after three games, ahead of Malawi on goals scored.