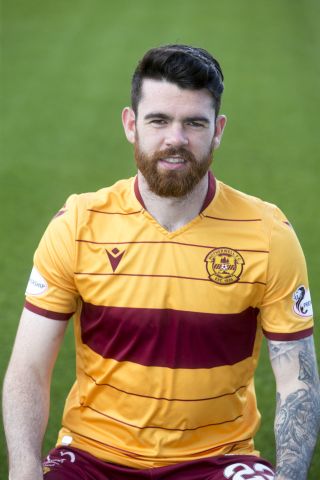 Motherwell moved into third place in the Ladbrokes Premiership with an unconvincing 2-1 win against 10-man Kilmarnock.

Killie were without both centre-backs from their recent resurgence under Angelo Alessio through injury and they lost another in controversial fashion after 13 minutes.

Alex Bruce was adjudged to have fouled Christopher Long as he raced through and referee Don Robertson quickly brandished a red card as the Killie defender was last man, but replays showed it was a perfectly-timed sliding challenge.

It turned into a nightmare couple of minutes for the visitors as, from the resulting free-kick, Liam Donnelly scored his ninth goal in 13 appearances this season.

The Northern Ireland internationalist tricked Laurentiu Branescu by firing his effort under the wall but the Kilmarnock goalkeeper will be disappointed not to have kept it out as he got a hand on the ball.

Kilmarnock reshuffled their pack, moving captain Gary Dicker into central defence, and they defended resolutely before shocking the hosts as they equalised on the half-hour mark.

After Stephen O’Donnell was fouled, Dom Thomas whipped in a brilliant left-footed ball that evaded everybody in a congested area and nestled in the bottom corner.

The hosts continued to dominate possession after the break and Jake Carroll went close after 52 minutes when his free-kick from 25 yards flew inches over the bar.

It was wave after wave of attack from Motherwell and they deservedly went ahead through Devante Cole in the 57th minute.

Left-back Carrol skipped down the left flank and produced an inviting cross for the Englishman to head home for his second goal in two games.

Both sides had chances as the game opened up, Alan Power’s ambitious long-range effort sailed just wide before Long’s acrobatic effort from a tight angle just evaded the top corner.

Kilmarnock kept battling away and they almost had an equaliser in bizarre fashion when Declan Gallagher awkwardly skewed a cross narrowly over his own bar after 74 minutes.

The travelling continent were livid when referee Robertson waved away a strong shout for a penalty for a push on Connor Johnson from the resulting corner.

Motherwell spurned a couple of chances to secure the win, substitute James Scott headed over the bar from a corner before Nicholas Hamalainen brilliantly deflected Alan Campbell’s goal-bound effort over the bar.

Substitute Eamonn Brophy almost grabbed a late equaliser for the visitors but Mark Gillespie made an impressive low stop to seal the win for the Well.