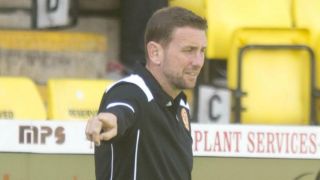 Motherwell have parted company with manager Ian Baraclough after the Scottish Premiership side made a poor start to the 2015-16 season.

Tuesday's shock 3-2 extra-time League Cup defeat to Championship outfit Greenock Morton was the last straw for the club's board.

Motherwell have won just two of their eight league matches to kick off the new Premiership campaign, scoring only five goals.

Baraclough took charge at Fir Park in December 2014 and overcame a poor start to keep them in the top flight by winning a two-legged play-off over Rangers.

Ultimately, though, he has lasted just nine months in the position, with his fate sealed after the cup exit to second-tier opposition.

"The board of directors would like to sincerely thank Ian for his great efforts last season and keeping the club in the SPFL Premiership for this very important season in the club history, with the 130th anniversary and the 25th anniversary of the 1991 Scottish Cup celebrated at the end of the season," read the club's statement.

"The board will immediately commence the search for a new manager."

Motherwell are back in action on Saturday when they host Partick Thistle, with coaches Stephen Craigan, Stephen Robinson and Jim Hollman taking temporary charge.