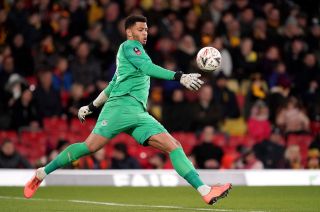 The 30-year-old 6ft 7in keeper arrives as cover for Trevor Carson after a knee injury ruled Scott Fox out for the season.

Manager Stephen Robinson told the club’s official website: “Aaron comes in to give us experienced cover and competition for Trevor. He has played a high number of games at a good level in England, so will prove a valuable addition.

“Importantly, this will also open the door for us to put PJ Morrison on loan. We want to do that so he can gain valuable experience at first-team level and we hope to announce a move for him shortly.

“That is vitally important for all young players but especially goalkeepers, who have a limited opportunity.”