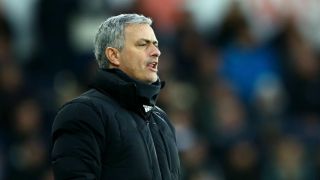 Fiorentina's Cuadrado, who can play on the right of defence or midfield, has caught the eye of several European suitors after impressing for Colombia at the World Cup last year.

Rumours have increased that Chelsea manager Mourinho was interested in striking a deal, with reports linking Schurrle and Salah with Wolfsburg and Roma respectively due to a lack of playing time.

However, the Portuguese stated that he has no plans to offload forwards Schurrle and Salah and that the duo will be in Chelsea's squad for Saturday's FA Cup fourth-round tie with Bradford City.

"Salah is selected [against Bradford]. Schurrle is the same, he's selected," he said. "I like them, I need them and I trust them.

"I can only play 11 players. Salah is not playing a lot, Schurrle slightly more, but they have played for us in every competition. I count on them."

"The question is whether we have a phenomenal offer and for the player to be super-keen to accept a new challenge in his career, because we don't want to sell our players."

Mourinho admitted that if the duo did leave he would have to draft in at least one replacement, but the former Real Madrid coach does not believe Cuadrado will be available.

"There are not men marked. I think he fits well in Fiorentina's squad and Colombia's squad, not in Chelsea's squad," he added.

"Our desire is to keep the same squad. We are happy with the players and the work we did in the summer to prepare for the season.

"If possible, we don't want to be involved in the transfer window. If we are, it's because someone pushed us into it with an offer for our players."

Mourinho also confirmed that captain John Terry is to be rested against Bradford, while Petr Cech will start in goal.