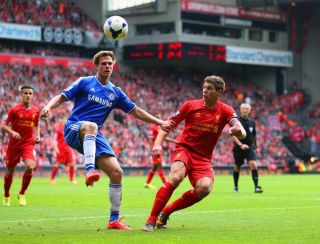 With Petr Cech sidelined by a dislocated shoulder, Schwarzer stepped into the goalkeeping breach, making just his second Premier League start of the season in the win at Anfield.

And ahead of their UEFA Champions League semi-final second leg with Atletico Madrid on Wednesday, Mourinho opted to leave Gary Cahill on the bench, with 20-year-old Kalas making his first start in Chelsea colours.

Despite the importance of the occasion, the Czech defender coped manfully with everything Liverpool could throw at the Chelsea backline, earning the praise of his manager.

"Beautiful," Mourinho said. "Before the match we were laughing because big guys like Frank Lampard and Ashley Cole, they had their debuts in the Premier League against small teams.

"This kid, Liverpool at Anfield, it's beautiful for him, (an occasion) not to forget."

The Portuguese had suggested beforehand that he may leave Schwarzer out of the match in a bid to avoid an injury ahead of the game with Atleti, but felt his decision to include the Australian had been justified.

"Very solid, very experienced and when Liverpool start putting long balls in the area, for Mark and Cahill and (Branislav) Ivanovic they were like fish in water," he said.

"(It was) easy for them and (Schwarzer) made not a lot, but a couple of important, difficult saves.

"Good for him, we made the decision for him to play not Hilario because he needs to play and this was a big game for him so it was good for his confidence."