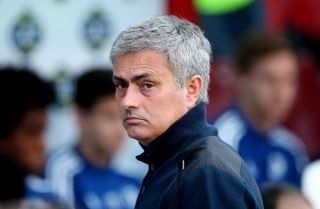 Chelsea's current strikeforce have only scored 15 Premier League goals between them during this campaign, with Samuel Eto'o having netted over half them.

The Cameroon international has eight league goals to his name but, at 33, is not a long-term option for Mourinho.

Meanwhile, Fernando Torres continues to misfire in front of goal and Demba Ba has rarely been given a starting spot, making the need for attacking reinforcements a top priority at Stamford Bridge.

Mourinho has Romelu Lukaku out on loan at Everton, where he has scored 12 league goals, but the 51-year-old is keen for further additions.

"I don't think it's the moment to speak about next season and the market but it's clear to everybody that Chelsea next year wants to bring a striker," said Mourinho.

"What's the future for the other strikers? The ones who are staying are competing with the striker we are bringing (in). And normally, at the end of the season, players that are not playing a lot or players who are not happy may prefer a change.

"That is also part of the market. We want to improve the team and the players and make some surgical movements in the transfer window.

"It's also clear that we want to improve our players. I can't and I don't need to improve (defenders Branislav) Ivanovic, (Gary) Cahill, (and) John Terry.

"There are other guys I need to improve. I think we are doing that step by step, but it's not enough to be champions."