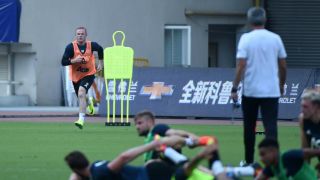 Jose Mourinho has assured Wayne Rooney of his captaincy and future at Manchester United, insisting the club mainstay will remain an important figure in his squad.

Having already stated Rooney would never play in midfield under him, Mourinho again faced questions about the captain's future at Old Trafford, much to the Portuguese manager's dismay.

"I am quite surprised with so many question marks around this guy," he said in Shanghai.

"I know that at the national team level you have this capacity of trying to make things complicated for yourself, so what happened around him in the summer was not a surprise for me.

"I trust him a lot. I think he's going to be a very important player for me and no problem for him."

But Mourinho said the armband did not guarantee Rooney a starting place alone.

"He knows that he has to work hard, he knows that but I think that is nothing new in his career. Everything he got I see nobody offer him, he had to fight for it," he said.

"With me it is not going to be different. But, yes, he is my captain."