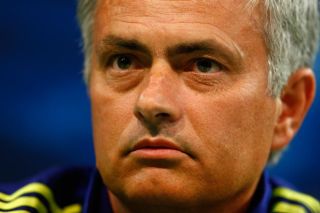 Chelsea have made a breathtaking start to their 2014-15 league campaign, winning six of seven matches and leading the table by five points already.

While the pair have caused nightmares for their opponents, Mourinho highlighted his goalkeeping stocks as an example of Chelsea's depth.

"Only we can lose a keeper and not panic. We lost a keeper and the panic was just what the kid [Courtois] has [suffered]," said Mourinho.

"But as for the football panic and talk of 'oh my god what is going to happen?' — the other one [Cech] just come comes and no one in the seats feels any fear because we know the big guy is there for us too.

"Petr is so solid, so confident, so under control so we are fine. I am happy with everything. In this moment our team are able to adapt to everything.

"What the game gives us, we can cope with. We are not the kind of team that play only the same way, think the same things. We can play in a different way and adapt to different situations."

"When we play in counter-attack, we are comfortable. In this moment the team are mature and confident and I'm very happy.

"People on the bench are also coming on strong, the way they are playing, the way they react. Mikel comes on and gives stability to the team. I think we're in a good moment."