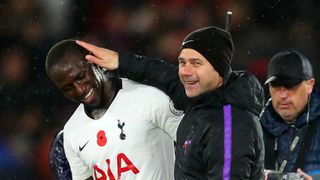 Sissoko's lack of minutes in 2017/18 fed into the dissapointment of not being in his country's all-conquering side the following summer.

"Not being at the 2018 World Cup was of course a disappointment, but not an end in itself," Sissoko told Le Parisien (via Goal).

"I had a complicated year with Tottenham. The coach's choices hurt me, but it's the law of football. The only thing to do was to redouble my efforts. To abandon everything would have been a descent into hell.

"I didn't want to stay on a failure. I never thought of leaving Tottenham, it gave me even more of a desire to do well.

"I have a winning mind, it has been like that throughout my career. I didn't make any noises, I didn't use the media to say that I had to play."

Sissoko's fortunes changed last season, as he made 27 starts for Spurs in the Premier League.

This season, he is again a staple at the base of Spurs' midfield and feels as if he is taking back control.

"I've never felt as strong as today," he said.

"I'm comfortable, fulfilled, confident. It's often said that the best form of a player is between 28 and 30 years old. I didn't believe it before, but I have certainly had my best season since playing football. I must continue to ride this wave."