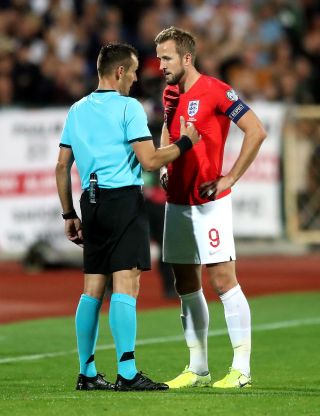 The group which helps UEFA monitor instances of racism at matches across Europe will help it build a “legally safe” case to prosecute Bulgaria after the abusive chanting during their match against England on Monday night.

The Fare network had observers inside the Levski Stadium in Sofia who fed their information to UEFA delegates, and this along with television footage will form part of the evidence European football’s governing body uses when making decisions on any sanctions.

Football Association chairman Greg Clarke last night called for football to take a “zero tolerance” approach to racism after the Euro 2020 qualifier was marred by abusive chants directed towards England’s black players and staff throughout the match.

We can confirm that @England players were subjected to abhorrent racist chanting while playing in the #EURO2020 qualifier against Bulgaria.— The FA (@FA) October 14, 2019

The Fare network’s executive director Piara Powar believes the match will prove a significant watermark and will raise questions about how a similar fixture is approached in future.

“We had observers at the match and they have an official role in the sense that they will have flagged up issues with the delegates and they will also have collected evidence of what we all saw through our TV screens,” he told the PA news agency.

“The fact that it was widespread racism cannot be in doubt and the issue now will be the evidence that UEFA needs to have a legally safe prosecution of the Bulgarians.

“That will partly be from us, and the footage from the broadcasters, so there’s no shortage of evidence.

“Given the debate that took place before this match, the focus on the Bulgarian fans and the widespread warnings that were issued, the concerns expressed by players, officials, it was quite shocking to see what took place. It seemed almost like the Bulgarian fans were determined to live up to the worst representation of themselves.”

The first step of UEFA’s anti-racism protocol was enacted as an announcement was made over the stadium’s public address system calling for the abusive chanting to stop.

It continued, and there was a further delay close to half-time. It is understood that this did not constitute the second step of the protocol, where the referee takes the players off the pitch temporarily.

The third and final step of the protocol is to abandon the fixture.

“There has to be a wider debate about, where we have a match like this, what should happen,” Powar added.

“These are real genuine dilemmas which are difficult to resolve – should UEFA have intervened and told the Bulgarians where to host this match? There are not many football associations around the world who would take that sort of interference.

“Should the England players and the English FA have refused to have played it given the fact all the predictions and all their concerns came true?

“Should Bulgaria now be eliminated from the competition, regardless of what the next step in the sanctioning process is?

Not an easy situation to play in and not one which should be happening in 2019. Proud we rose above it to take three points but this needs stamping out. pic.twitter.com/jTnUGOa8z2— Marcus Rashford (@MarcusRashford) October 14, 2019

“A lot of difficult questions UEFA will need to answer now, these are not easy issues to grapple with.”

UEFA rules appear to indicate that the punishment for Bulgaria would be to play their next home match behind closed doors, but there is likely to be huge pressure for the sanctions to be more severe than that.

Anti-racism campaign group Kick It Out called for a points deduction to be imposed or for Bulgaria to be expelled from the competition.