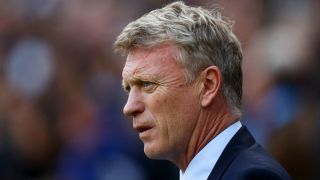 Sunderland boss David Moyes claimed that the goal that condemned his side to their seventh league defeat of the season at West Ham should have been ruled out for offside.

Winston Reid fired a low shot through a crowded box into the bottom right corner in the 94th minute to secure a 1-0 victory for the hosts at the London Stadium.

But Moyes insisted that West Ham had players interfering with play - in particular Jonathan Calleri, who was positioned right in front of goalkeeper Jordan Pickford - and that the goal should not have stood.

"It was offside," he said in remarks reported by the BBC. "It should be given offside. The referee thinks it is onside. You can tell by the referee's movement to the linesman that he is not sure, they weren't sure but it was not a goal."

Moyes went on to praise his charges who produced a spirited display and came agonisingly close to securing their third point and first clean sheet of the season.

Having survived a torrid opening half-hour in which Dimitri Payet struck the post for the dominant home side, they duly rallied and should have taken the lead immediately after the break when Wahbi Khazri found himself clean through but fired weakly at home goalkeeper Adrian.

"I thought the players played well," said Moyes. "Not in the opening 20 minutes, they bossed us, but we got through it and had good chances. I am very pleased with the performance but not the result.

"I thought we did good things. I did not enjoy the first part, but the second half we were not threatened and if anything we looked more likely to score.

"You have to take your chances. I said in the last few weeks there have been signs of improvement, I thought the players showed it today."

Their defeat in the capital, coupled with Swansea's draw against Watford, leaves Sunderland three points adrift at the foot of the table.

Moyes' side return to action on Wednesday when they visit Southampton in the EFL Cup before hosting Arsenal in the Premier League on Saturday.