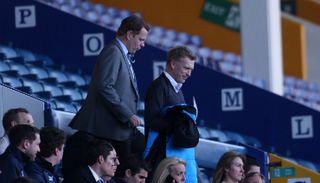 Moyes, who has been at Everton for 11 years, is favourite to become United's manager following Ferguson's decision to retire at the end of the season after winning two Champions Leagues, 13 league titles, five FA Cups in more than 26 years at Old Trafford.

"The manager met chairman Bill Kenwright early yesterday evening and confirmed his desire to join Manchester United," Everton said in a statement on their website.

"The chairman, on behalf of the club, would like to place on record his thanks to David for the massive contribution he has made to Everton since his arrival in March 2002.

"He has been an outstanding manager."

Moyes, whose contract expires in a few weeks, will remain in charge for Everton's final two Premier League games of the season against West Ham United and Chelsea.

United have not confirmed whether Moyes will be their first new manager for 27 years. Local media reported that the club's Facebook page had accidentally announced his appointment but has since deleted the page.

While Moyes shares the steely glare, work ethic and Scottish accent of Ferguson, he has none of the trophies.

The closest he came to silverware with Everton was the 2009 FA Cup, in which they lost 2-1 to Chelsea in the final having taken a first-minute lead.

He is also a Champions League novice, having only once guided Everton to a place in Europe's elite competition although they never reached the group stage, going out 4-2 on aggregate to Villarreal in the third qualifying round in 2005/06.

While the world awaits confirmation of what looks like an inevitable appointment, the focus on Merseyside will shift to filling their own vacancy.

Wigan's Roberto Martinez is among the early front-runners but the Spaniard said on Thursday his focus was on his club's battle for Premier League survival and Saturday's FA Cup final against Manchester City.

"Everton officials will start the search for a replacement manager immediately," the club statement said.

Moyes will be a tough act to follow after creating a period of stability at Everton, with four top-six finishes in his time at the club and a knack for creating competitive teams with only modest resources.