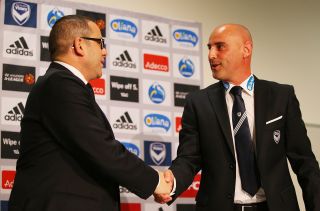 Muscat was formally unveiled as the new head coach on Thursday, having signed a two-year deal which contracts him until the end of the 2014-15 campaign.

The inaugural club captain and a two-time championship-winner during his playing days, Muscat feels there is no reason he cannot bring the ultimate prize back to AAMI Park at the first attempt.

"I learnt very quickly at this football club that winning silverware and being successful... that was the mantra 10 years ago when I first arrived," he said.

"That the football club was geared to being successful. I'll be giving it my all to try and win things immediately. Everyone at this stage in the competition is still trying to win it. We're no different."

Muscat said it will be business as usual for Victory on the field following Postecoglou's departure to coach the Socceroos, with no major tactical changes expected.

"The football team now has an identity," he said.

"There's a certain DNA that's expected from Melbourne Victory when they perform now. My ego doesn't tell me that I need to fracture what's happened in the last 18 months and rebuild it.

"I believe I was integral in implementing the football philosophy at the moment and I intend to improve that as time goes on."

Notoriously prone to disciplinary issues as a player, Muscat acknowledged his reputation will precede him in some quarters, but does not expect that chequered past to affect his career in the dugout.

"I do understand there will be preconceived ideas about myself and I don't frown upon those at all," he said.

"I just ask to be judged on merit in what I do with the football team and time will tell."

According to Victory chairman Anthony Di Pietro, no other candidates were seriously considered to fill the void left by Postecoglou, with Muscat the club's first and only choice.

"We were very clear about what we wanted to do," he said.

"It was clear that we had a program in place and Kevin was by far the best-placed person to continue that on. It wasn't a decision made with comfort or ease, it was a decision that was made because it was the right decision."