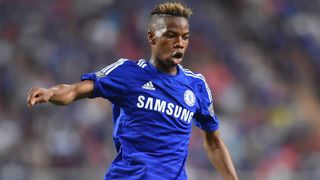 Charly Musonda could make his Chelsea breakthrough this season if he focuses his mind "on the pitch and not social media", according to Blues boss Antonio Conte.

Musonda hit the headlines this week after venting his frustration at a lack of playing time at Stamford Bridge via a cryptic message on Instagram.

Conte has spoken to the 20-year-old and ordered him to knuckle down and follow the example of defender Andreas Christensen, who has returned from a lengthy loan spell in the Bundesliga to become a regular first-team squad member.

The Italian, speaking ahead of Saturday's game at Crystal Palace, said: "Andreas can be a good example. After two years on loan and good experiences at Borussia Monchengladbach, he's now a player than can play with Chelsea.

"But for Charly, he could have a good opportunity to play this season as we only have three number 10s, [Eden] Hazard, Willian and Pedro. Usually we play with two, [so] this season could be good for him to show he deserves to play. He's a talented player."

Conte says Charly Musonda must continue to work to improve physically and mentally, and his mind must be focused on the pitch. October 13, 2017

On his social media indiscretion, Conte added: "I spoke with him. I think Charly understood his mistake and he has to continue to work hard to improve himself, his physicality and his tactical understanding, but he's working well.

"His mind must be focused on the pitch and not social media. I told him this and my task is to help him to always find the right way, not the wrong way.

"Social media is not the most important thing for his career."