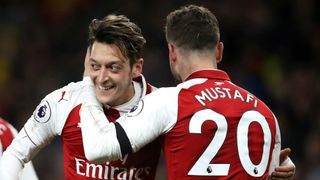 Criticised prior to the World Cup after meeting with Turkish president Recep Tayyip Erdogan, Ozil was back in the spotlight after the holders fell at the first hurdle in Russia, finishing bottom of Group F.

The 29-year-old used a series of statements on social media to air his disappointment at his treatment, claiming some the criticism of his performances amounted to "racism" and accusing senior figures in German football of not doing enough to protect him, adding he would no longer make himself available for coach Joachim Low.

Mustafi – who, along with Ozil, was a part of the Germany squad crowned world champions in 2014 – has spoken out in support of his friend.

"It did surprise me. He made his decision after this time off when he was by himself and thinking about his future," the defender told reporters.

"I think it is a personal decision he made. As a team-mate and a friend, I stand beside him and if he needs help, I'm going be there for him.

"Of course, I'm a bit disappointed because I think he's an excellent footballer who has given a lot to the German national team.

"From my point of view, he is going to be missed but it is a personal decision and we have to respect that."

Mustafi and Ozil are both part of the Arsenal squad on tour in Singapore under the guidance of Unai Emery, who has overseen a series of new signings since the end of the 2017-18 season.

Centre-back Sokratis Papastathopoulos' arrival from Borussia Dortmund adds another defensive option for the new head coach but, rather than worry about his own future, Mustafi has welcomed the extra competition.

"It is nothing new. We are professionals and we have to handle pressure and perform."