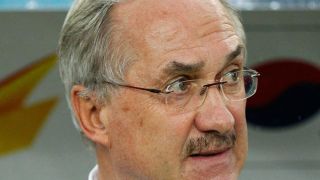 South Korea will look to carry on where they left off last week as they begin their AFC World Cup qualifying campaign against Myanmar in Bangkok.

The Asian Cup runners-up are unbeaten in three friendlies since losing the continental championship decider to hosts Australia in January.

A draw to Uzbekistan was followed by wins over New Zealand and United Arab Emirates - and in the latter meeting on Thursday South Korea scored three goals for the first time in 15 outings.

Uli Stielike's men have the ideal start to their Group G qualifying campaign, given Myanmar are winless in six fixtures - including a 2-2 draw with Laos last week to earn their first point in qualifying.

Myanmar have selected the Thailand capital for their home fixture after they were banned from playing on home soil due to crowd misbehaviour in a World Cup qualifier in 2011.

Their Serbian coach Radojko Avramovic said he is hoping to learn more about his charges.

"We know that South Korea is a very strong team," he told Korea Times.

"We will try to play our game and not worry too much about their players.

"We are looking forward to the challenge and it is with such games that we can improve."