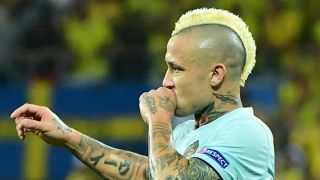 Marc Wilmots has revealed he ensured Radja Nainggolan was given a room with a balcony at Euro 2016 - because he smokes.

The Roma midfielder is the only smoker in the Belgium squad, but Wilmots said Nainggolan would "trash" his hotel room if banned from smoking.

Belgium are preparing to face Hungary in Euro 2016's first knockout round on Sunday, but Wilmots appears unconcerned by Nainggolan's habit.

"Yes, Radja smokes," Wilmots told Sporza. "It's a habit and a lot of people do it in France and Italy.

"I am not going to stop him if that's what he needs. I am flexible when it comes to matters like this. It's his body.

"I'm fine with it so long as he performs out there on the pitch.

"I always make sure he gets a room with a balcony, so he does not set off the smoke alarm.

"I think he is the only one at the Belgium national team who smokes.

"I reckon he would trash his room if we forbade him to smoke five or six cigarettes per day.

"It's his problem if this means he will have to retire at 30 rather than at 35."