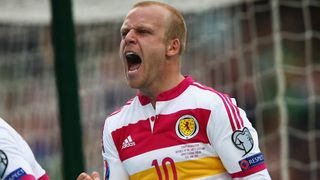 New Norwich City signing Steven Naismith is targeting another debut goal when he fronts up against Liverpool on Saturday.

Naismith was signed by Norwich on Tuesday for a fee believed to be close to £8million after spending three years with Everton.

The Scotland international scored his first Premier League goal for Everton against rivals Liverpool, and Naismith is hoping he can repeat the feat at Carrow Road.

"Speaking to the manager [Alex Neil], I am going to get an opportunity to play. Once I get that chance I need to do well to stay in the team and I am relishing that opportunity," Naismith said.

"Just being involved is great; it is a nice coincidence that [my first match] is against Liverpool.

"It will be a tough game, one which we need to be ready for from the off, they have some great players, but at home especially Norwich have looked very strong in all their games, so I am looking forward to hopefully being involved in some way.

"I scored my first goal [for Everton] against them, so if I could replicate that, it would be another good start."