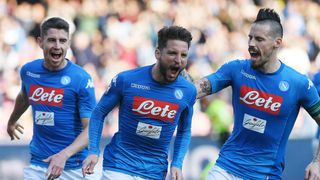 Dries Mertens scored twice as Napoli fought back to beat Bologna 3-1 and return to the top of Serie A.

Maurizio Sarri's side saw Juventus overtake them with a 2-0 win at Chievo on Saturday but they responded with their sixth league win in a row at the San Paolo.

Bologna snatched the lead in the first minute through former Inter striker Rodrigo Palacio but they were pegged back four minutes later in unceremonious fashion, with Ibrahima Mbaye turning the ball into his own net after trying and failing to clear it off the line.

Mertens put Napoli ahead with a controversial penalty eight minutes before the break, with referee Paolo Mazzoleni awarding the spot-kick for an Adam Masina foul after a VAR referral, despite minimal contact between Jose Callejon and the full-back.

Belgium star Mertens made the points safe just before the hour mark, cutting onto his right foot and firing into the right-hand corner from inside the area for his 13th league goal of the season.

The win puts Napoli a point clear of Juve after 22 games, while Bologna stay 12th.