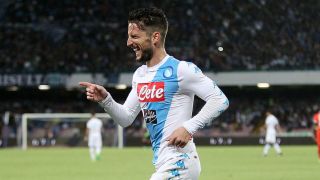 A Dries Mertens double enabled Napoli to defeat Fiorentina 4-1 and set a new club record Serie A points total with one game of the 2016-17 season to go.

The routine success on Saturday at Stadio San Paolo edged Napoli back to within a point of Roma – 5-3 victors over Chievo earlier in the day – and kept alive hopes of leapfrogging them on the final weekend and finishing second behind Juventus, who need one win from their final two games to reclaim the title.

Kalidou Koulibaly put the hosts ahead after just eight minutes, making no mistake when Ciprian Tatarusanu could only parry a Marek Hamsik header into his path.

It should have been 2-0 when Mertens beat the offside trap to bear down on goal, but he left it a fraction too late to get his shot away as he skipped past onrushing goalkeeper Tatarusanu and hit the side netting.

Mertens then curled a 25-yard shot against the post, but Napoli were not to be denied a second when Lorenzo Insigne wrong-footed Tatarusanu with his shot after Fiorentina surrendered possession cheaply in midfield.

Tatarusanu gifted Mertens his first of the night when he came off his line and attempted to punch clear in a crowded penalty area, but instead the ball spun awkwardly and allowed the Belgium international to prod home from a narrow angle.

Josip Ilicic pulled one back for Fiorentina three minutes later when he neatly tucked away Cristian Tello's cross, but it proved a consolation goal as Mertens added further gloss to the scoreline.

83 - have gained 83 points in the current league, a new record for the Azzurri in a single Serie A tournament. Growth.May 20, 2017