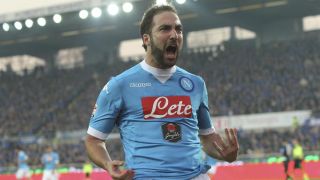 Napoli rejected an offer from Atletico Madrid of €60million "plus two or three players" for Gonzalo Higuain, according to club president Aurelio De Laurentiis.

The Argentina international's future has been the subject of intense speculation in recent weeks, with Atletico, Juventus and Arsenal all heavily linked with an interest.

Juve held talks with their Serie A rivals over the striker this week, though De Laurentiis - who is demanding that any suitors meet Higuain's €94m release clause - claimed the deal was dead in the water.

Manchester United's reported interest in Paul Pogba has reignited speculation that Juve could return with an offer close to that amount, but De Laurentiis remains convinced that the 28-year-old will stay after revealing he has already rejected a major bid from Atletico.

"Even if Juventus were to come back into the picture, they'd need Higuain's consent," he said. "You can't profess yourself one of the curva, singing Napoli songs and then go to Napoli's historic rival.

"The game of games has always been with Juventus. I haven't spoken to Higuain, so all these suggestions are coming from different agendas within the media.

"The only offer I've had was from the Atletico president [Enrique Cerezo] a month ago and I told him we couldn't do it. He offered me €60m plus two or three players and I said no.

"Leaving would be a contradiction; Juve and Napoli are likes cats and dogs. It would be the height of absurdity if he did something like that."

De Laurentiis did suggest that Napoli's ambitions would not be damaged if they were to cash in on Higuain, however, as he outlined plans to make up to 10 signings ahead of next season.

"We're working on various areas of the pitch," he said, with the agent of Mainz defender Giulio Donati having already confirmed talks with the club.

"We're after Donati and 10 others. We need a right-back - maybe it'd be better to have someone who can play either side - then we need one or two midfielders.

"Then we'll see if we'll need a replacement for Higuain or not. Even without Higuain, we came second in 2013."