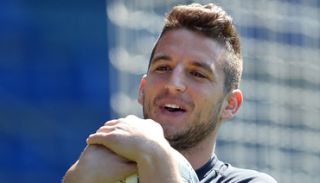 A statement on the club website said it had secured the 26-year-old former PSV Eindhoven player on a five-year deal.

Napoli owner Aurelio De Laurentiis welcomed Mertens to the club on his official Twitter account saying: "I am happy to tell you that a few minutes ago I closed the deal with PSV for Dries Mertens.

"In the last few days Dries has been in Naples. He told me that he fell in love with our city, with its greatness. Welcome Dries."

Mertens has 19 senior international caps for Belgium, scoring twice, and spent the past two seasons at PSV where he made 62 appearances.