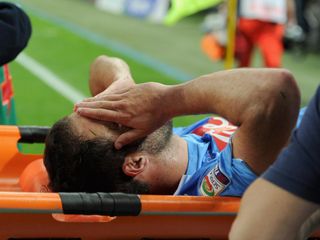 The Argentina striker was forced off in the closing stages of the San Siro clash after a heavy challenge from home defender Marco Andreolli.

Higuain had to be stretchered from the field and received oxygen as he appeared to be in serious pain.

Napoli confirmed the former Real Madrid man has suffered a painful impact injury to his ankle, though a timescale for his return is yet to be defined.

Rafael Benitez will be desperate for Higuain to regain his fitness as soon as possible with next week's Coppa Italia final against Fiorentina looming.

A club statement read: "Strong blunt trauma to the right tibia. This the outcome of examinations submitted this morning on Gonzalo Higuain after the collision during Inter-Napoli with Andreolli.

"Clinical tests have confirmed what was first diagnosed yesterday.

"(Higuain) today did therapy and his condition will be evaluated in the coming days."

Argentina coach Alejandro Sabella will also take a keen interest in the fitness of Higuain, who is expected to be a part of his FIFA World Cup plans.