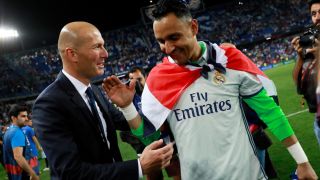 The Costa Rica international kept a clean sheet as Madrid recorded a 2-0 win at Malaga on Sunday, capturing the LaLiga crown for the first time since 2012.

Navas, 30, arrived to face media with a shaved head and said he wanted to dedicate the title triumph to those battling cancer.

"I pray to God for all of them, that they can recover from their illness," he said.

"For all of the kids fighting cancer. For their families, for those who continue fighting. This title is for them."

Despite constant speculation over his future, Navas was instrumental in helping Madrid this season, making 27 league starts.

He was delighted that his team's efforts resulted in the title, saying: "It has been a great year and this is the reward for our hard work.

"Let's hope that this is just the first of many LaLiga titles. We've battled hard throughout the whole season, given our all until the end and we're very happy."

Madrid still have one game left this campaign, defending their Champions League crown in the final against Juventus on June 3.