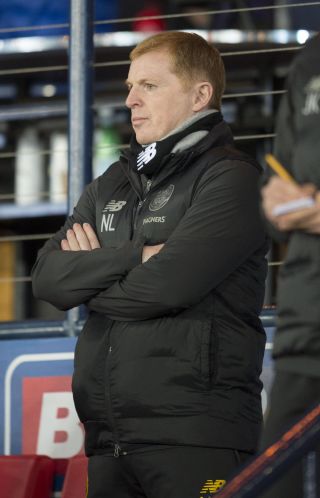 Forward Mohamed Elyounoussi, on loan from Southampton, and skipper Scott Brown, who passed a late fitness test, both bagged a brace, with midfielder Callum McGregor also on the scoresheet.

Melker Hallberg and half-time substitute Florian Kamberi netted for Hibs against a Celtic side who have now won 30 successive cup ties.

Lennon said: “We were breathtaking today from start to finish.

“Some of the football and attacking intent, obviously we scored five goals which is fantastic for a semi-final.

“We could have had more, we hit the post twice, their keeper made some great saves. We were absolutely scintillating.

“I can’t speak highly enough of the level of performance and mentality of the team.”

The Northern Irishman was delighted that 34-year-old midfielder Brown passed a late fitness test after coming off in the midweek win over St Mirren with a thigh problem.

Lennon said: “He has been in outstanding form.

“We were concerned he would miss the game because he is such a big loss to the way we want to play but he came through the fitness test no problem and lasted the 90 minutes and scored two goals in a semi-final.

“He just keeps writing more stories for himself.

“Elyounoussi was outstanding, that was the best he has played since he came in and he is getting better.

“We are making him better and he is making us better.”

Lennon paid tribute to former Celtic manager Brendan Rodgers for setting the standards which have seen Celtic so successful in cup ties over the last three seasons, where an unprecedented domestic treble treble was achieved.

The former Celtic captain, who took over from Rodgers last February when the former moved to Leicester, said: “They are under scrutiny at the minute, people want to see this run end but their pride won’t let that happen.

“One day it will go but they are relentless in their pursuit of trophies at the minute.

“I don’t know where it ranks in British football in terms of records but it is amazing because anything can happen on any given day.

“I’ve had bad days as a player and manager but Brendan has put this mentality in place and we are trying to carry on.

“The players just don’t want to give it up.

“Everyone is coming for them and we want to stand there toe-to-toe and keep going.”

Hibs manager Paul Heckingbottom, under fire for one win in 11 Ladbrokes Premiership games this season, claimed his side were architects of their own downfall in the cup tie, especially in the first half.

He said: “When you go 2-0 down to Celtic in that sort of form, it is a real uphill battle.

“I thought they were very good but we played our part helping them, especially in the first half.

“We kept giving them the ball.

“Some of it was them, their pressure and tempo, definitely, but we had probably twice as many positions as we had when we played them at Easter Road but just kept giving the ball away and that was the problem first half.

“Our focus is on the league but today was separate. I saw more than enough to know that we can change things.”