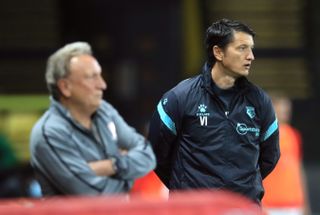 Middlesbrough boss Neil Warnock was left bemoaning his side conceding a “Sunday League goal” as they lost at Watford in the first game of the Sky Bet Championship season.

The Hornets saw their five-year stint in the Premier League end with relegation in July but Craig Cathcart’s early header was enough to secure a 1-0 victory in Vladimir Ivic’s first match in charge.

Despite the win, Watford failed to register a shot on target in the second half as the visitors pushed for a share of the spoils.

Warnock was pleased with the efforts of his side against the team he had earlier claimed were the best in the division but felt they could have done more to prevent conceding the goal.

Cathcart headed home with 11 minutes on the clock as Watford worked a short corner routine with Ken Sema’s cross picking out the Northern Ireland defender.

Asked about Cathcart’s effort, Warnock replied: “Sunday League goal, what can you say?

“I don’t expect to concede them at any stage of the season, you can’t say we don’t practice enough. It is just elementary tonight – we have got to try and get away from that really.

“That is football, isn’t it? I don’t think our goalie had a shot to save but it is all about putting the ball in the back of the net so you have got to give them credit.

“I don’t think they had a clue how to break us down, I think the goalkeeper played centre-half in the second half so I can’t be happier with that, but which dressing room would I rather be in tonight? The winning one.”

Warnock admitted it would have been “nice” to have more attacking options on the bench as he works to bring more players in ahead of the deadline – although he confirmed a move for former Arsenal striker Yaya Sanogo was now dead in the water.

Ivic was able to toast three points despite missing a host of first-team players.

The likes of Troy Deeney, Danny Welbeck, Will Hughes, Ismaila Sarr and Craig Dawson were all missing and – despite most being sidelined with injuries or knocks – it is unlikely that quintet will all be at Vicarage Road after the transfer deadline.

Ivic, though, said he preferred to work with players who are “positive every day”, although he is keen to improve the attacking display from his side.

“It is a good start, a clean sheet and we won the game so we can be satisfied with the result and the three points,” he said.

“I believe that we didn’t do good things in our attacking moments, we didn’t play very well with the ball, we have to work a lot to improve this part of the game.

“Sometimes in a game things don’t go in the direction you prepare it but it was the first game.

“There wasn’t enough time to work and improve, especially in this attacking part, we need to be much better.”