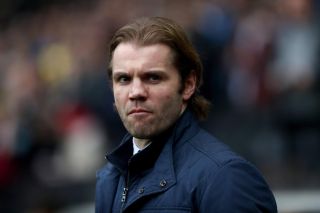 Robbie Neilson has warned St Mirren the pressure is all on them as they prepare to fight for their top-flight lives against his Dundee United side.

The Tangerines host Oran Kearney’s Buddies in the opening leg of their Ladbrokes Premiership play-off final on Thursday.

United are looking to end their three-year stay in the Championship wilderness, while they Paisley men are determined to avoid dropping back down a year on from winning the second-tier title.

Both sides have a lot riding on this week’s double-header but Neilson switched up the mind-games by insisting his Tannadice squad are the underdogs.

The former Hearts boss said: “The pressure, the expectations and the favourite tag are always on the Premiership team. There is no doubt about that because they’ve spent their season at top-flight level playing tough games.

“Although the Championship is tough, we’re not facing games that are as hard as going to Ibrox, Parkhead, Tynecastle and Easter Road.

“So we’re going into this as the underdogs but that’s a tag we’re happy to take as we have belief in the team.

“We recruited in January to make sure if we ended up in this position we had boys who’ve got experience of doing this sort of thing before.

“We were after guys who’d played in big games and pressurised environments.

“Thankfully they have come through a very, very tough game against Inverness by winning home and away and are now looking forward to this next one.

“There are no nerves at all in our camp.”

Neilson may believe St Mirren are the favourites but it was United who came out on top in the only previous meeting of the teams this term as they dumped the Buddies out of the William Hill Scottish Cup back in February.

Kearney has already insisted this week that his side are no longer the pushovers they were then and they march into Thursday’s opener on a run of six games undefeated.

But Neilson says his team have also developed in the three months since.

He said: “I always think a manager should always say their team has improved because if they have not, you’re in trouble.

“Look, there’s been a lot of changes in both teams in that period. We got a good result down there but since then we’ve got guys back into form and back from injury.

“So we’re looking forward to the first game at Tannadice and then going down there with an advantage.

“St Mirren are in good form. Usually as the Championship side you’re taking on a team that has suffered a blow by finishing 11th but St Mirren will be feeling good about themselves.