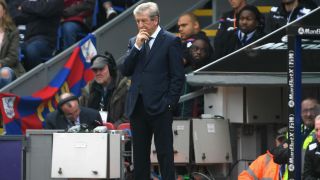 Roy Hodgson felt Crystal Palace were lacking in self-belief as they slipped to a 1-0 defeat to Southampton in his first game in charge.

Steven Davis hit the winner in only the sixth minute at Selhurst Park and Fraser Forster made good saves to deny Christian Benteke and Jason Puncheon, as Palace became the first team in the history of England's top division to lose their opening five games of a season without scoring a goal.

Hodgson saw improvement in their second-half display but admitted they were too "frantic" as they chased a result.

"We didn't push up to the ball as well as we would have liked and were perhaps a bit cautious, the midfield players dropping too deep and giving them too much time on the ball," he told Sky Sports.

"In the second half, we attacked better, nowhere near as well as I would like to see but we did get up to the ball better. The desire was there but unfortunately it was a frantic desire, where you're chasing and hoping, not when you're in control and causing the opponents problems.

5 - Crystal Palace are the first side in English top-flight history to open the season with five defeats and no goals scored. Woe. September 16, 2017

"We were very nervous in the first half, people didn't show any confidence on the ball and we wanted to persuade them they didn't need to have that lack of confidence.

"Confidence is an issue in every walk of life. But the confidence in football terms only comes from seeing the work you're trying to do pay off, in particular in terms of results. This is a further blow, but it's a fact of life. Nothing I can say will change the five results or score the goals.

"Confidence will come back when the performances improve and the results start coming."

Saints boss Mauricio Pellegrino was delighted to leave with three points and believes Palace proved they are a good side despite their dreadful run.

"You have to fight for every single point. You could see today that Crystal Palace were good," he told BBC Sport.

"They created chances in the first half and pressed higher in the second but in general we controlled the game.

"We could have scored another goal but playing here is really difficult."