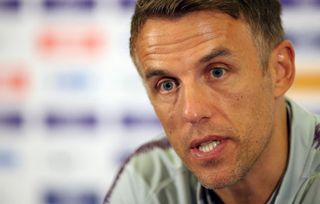 England boss Phil Neville described being linked with the United States as flattering but stressed his focus was on the Lionesses following his side’s 2-1 loss to Norway.

Ahead of Tuesday’s friendly in Bergen, it was reported by the Daily Mail that Neville was the number one target of world champions the US to replace outgoing manager Jill Ellis.

When asked about that after the game, Neville – who is set to be in charge of a Great Britain team at next summer’s Tokyo Olympics – told BBC Sport: “There has been no approach.

“My focus is on winning us a gold medal in the Olympics and beyond that. It’s flattering because it means you are doing a good job, but my focus is England.

“I love this job, and we’ve got a big job to do. We can see over the last two games that the work is still in progress and we’ve still got a long way to go.”

Five days on from drawing 3-3 with Belgium in Leuven, Neville’s team took the lead through a superb 10th-minute strike from Georgia Stanway, who sent the ball in off the bar from around 25 yards out.

Frida Maanum equalised in the 53rd minute as she got her head to a corner ahead of Rachel Daly.

And Barcelona’s Caroline Graham Hansen then took advantage of England giving the ball away as she scored the winner with a minute of normal time to go, pouncing on a misjudged Millie Bright pass, advancing into the box and past Steph Houghton’s diving challenge, and cracking a shot past Carly Telford.

“But for me, we have got to keep working on the basics of passing the ball. Our defending today in the first half especially was much better, but the fundamental basics of football are passing to each other. I still thought we were sloppy. This pre-season they are still trying to find their rhythm, but I still expect more from us.”

Asked about conceding from set-pieces, Neville said: “It is a concern because we work hard at it, we do a lot of defending and attacking set-plays, and basically it is a ball coming into the box that you have to throw your head at, you’ve got to want to head the ball.

“It’s disappointing that they conceded in a game that I felt always comfortable and we have ended up losing.”

England have now gone four games without a win since their 3-0 World Cup quarter-final victory over Norway in June.

During Tuesday’s match, the Football Association announced the next fixture will be a friendly against Brazil at Middlesbrough’s Riverside Stadium on October 5.

And Neville said: “We’ve got another game after that that we’ll announce shortly, and I’ve said to them we have to win both games. We have to start winning games again and playing better.”