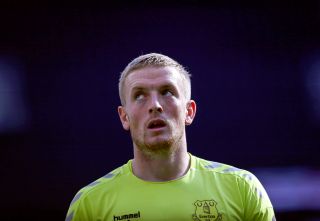 The 26-year-old was at fault for Brighton’s first goal in the Toffees’ 4-2 win on Saturday which took them top of the Premier League, coming only days after two mistakes in a Carabao Cup win at Fleetwood.

Having insisted just over a week ago he was not planning on strengthening his goalkeeping options, manager Carlo Ancelotti made a deadline-day loan move for Roma’s Sweden international Robin Olsen.

However, Southall, who averaged a clean sheet once every 2.8 matches across his 751 appearances, albeit playing in a much more successful team, believes Pickford (averaging a clean sheet every 3.6 matches) remains a valuable asset to Everton.

“I think he’s had probably three bad minutes in six months – if (that),” he told Sky Sports.

“His mistakes aren’t killing us – I think that’s a good thing – and I think once he finds his form, we’ll be flying.

“There’ll be a time when we have that little bump in the road and maybe we’ll have to rely on him. Maybe people will have to change their opinions.

“But I do think, if Mr Ancelotti wants to play you, you must be half-decent. If his job was on the line, there’d be a taxi outside Goodison tomorrow.”

Fellow former Everton goalkeeper Tim Howard believes Pickord, in Gareth Southgate’s squad for the friendly against Wales and Nations League matches against Belgium and Denmark, may benefit from Olsen’s arrival.

“Jordan is also a top goalkeeper. There have been a few wobbles in his game recently but no-one is exempt, at the highest level, from having a mistake or two.

“Jordan just needs to get back to basics and put a 10-game run together where there are no errors. But that happens at the highest level.

“I think bringing in another goalkeeper always helps to create competition and urgency.”