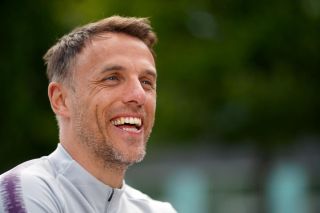 England boss Phil Neville has described the time his players spent with the Royal Marines this week as a “wonderful experience”.

The team-building exercise was part of the Lionesses’ preparations for this summer’s Women’s World Cup as the squad spent a day and night with the Marines at England’s St George’s Park base, cooking their own food and sleeping in tents.

Neville told Press Association Sport on Friday: “I think sometimes when you are in charge of football teams you need to do things a little bit out of the comfort zone.

“We thought long and hard about what the challenges are going to be over the next hopefully 52 days, and one of those was the togetherness and the team bonding and the spirit of the squad.

“You can work as hard as you possibly can on the football field, but that’s our comfort zone, where we feel at home.

“We wanted to do something a little bit different, and to take people out into the forest with no phones, no iPads, no Playstations is totally different for them.

“It was a wonderful experience where we swapped stories, shared experiences and hopefully when this journey is over we can look back at that as one of the memories we created.”

Neville was speaking ahead of Saturday’s clash with Denmark in Walsall, his team’s penultimate warm-up game for the World Cup in France that starts in two weeks’ time.

“But ultimately it is about us. We focused a lot this week on us, on our principles of play, on what we want to do, because ultimately the bigger prize is to concentrate on the Scotland, Argentina and Japan games (their three Group D games).

“But we’re under no illusions that the Denmark game tomorrow could be every bit as difficult as the group stage (matches) that we get.”

It looks as if goalkeeper Carly Telford will not be involved in the contest at the Banks’s Stadium, having suffered a knock and missed training on Friday.

And Neville said Lucy Bronze and Toni Duggan, who played for Lyon and Barcelona respectively in last weekend’s Women’s Champions League final, would be rested on Saturday.

Meanwhile, the manager revealed he was not contacted by Brighton after they sacked boss Chris Hughton last week.

Neville’s name was linked with the vacancy before the Seagulls appointed Graham Potter as Hughton’s successor.