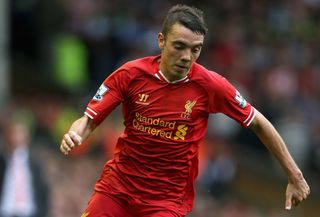 The 26-year-old striker arrived at Anfield for a fee of around £7.5million from Celta Vigo during the close-season with a big reputation, having scored 35 league goals in his previous two seasons in Spain.

However, he has so far failed to find his form on Merseyside and is yet to score his first competitive goal after six Premier League appearances for the club.

The return of Luis Suarez after his 10-match ban for biting Branislav Ivanovic and the form of England striker Daniel Sturridge mean that Aspas has been reduced to a bit-part role in recent weeks.

And he has conceded that has made it difficult to adjust to his new surroundings.

"I'm finding it hard to be a sub at Liverpool having started games in the past few years," he told the Daily Mail.

"When I left Celta Vigo I was aware that to start for Liverpool wasn't going to be easy.

"And now the team is winning and we are among the leaders in the Premier League, it's much harder to get a game."

Sturridge and Suarez have formed a superb partnership to help fire Liverpool to second in the table, with 11 goals between them in all competitions already this term.

But Aspas is convinced that he can still work his way back into boss Brendan Rodgers' plans.

"I hope to carry on working hard and little by little to get more game time with Liverpool," he added.

"I want to change the current situation."