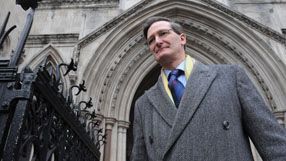 Attorney General Dominic Grieve said he planned to apply to the High Court to quash the "accidental death" verdicts reached at the original inquest.

The Liverpool supporters died after a crush in an enclosed, overcrowded terrace at the Hillsborough stadium in the northern city of Sheffield on April 15, 1989 during an FA Cup semi-final against Nottingham Forest.

Their families have campaigned for more than 20 years to overturn official accounts that smeared fans, blaming them for being drunk, ticketless and intent on forcing their way into the packed ground.

An independent inquiry concluded last month that police tried to deflect the blame onto fans to cover up their own incompetence and suggested that 41 lives could have been saved if the emergency response had been quicker.

"My current view is that I will apply to have every one of those 96 inquests quashed," Grieve told parliament. "These deaths, arising as they do from a common chain of events, should all be considered afresh."

The process of applying to the courts to overturn the original inquest verdicts is "far from over" and the families must be contacted, he added. A timetable for the process was not announced.

Steve Rotheram, a Labour member of parliament for Liverpool, said the move "marks one of the biggest steps forward in the fight for justice for the families in 23 years".

"For the first time in over two decades, all the evidence can now be reviewed into the disaster and potentially a new verdict recorded on the death certificates of the deceased," he said in a statement.

"At long last, the full horror of Hillsborough will be on the public record alongside the names of the people and the organisations that are accountable for what happened."

One of the most controversial elements of the first inquest was the coroner's decision to limit its scope to events leading up to only 3:15pm, 15 minutes after the kick-off.

That was on the basis that all victims would have already been dead or suffered brain damage by that time. Campaigners have long argued that the cut-off point was arbitrary and wrong.