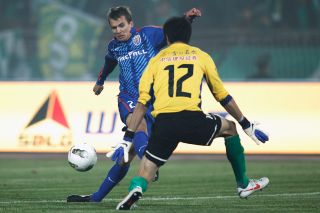 Griffiths, who signed with the Jets earlier this month, had been forced to watch from the sidelines after his Chinese club Qingdao Jonoon refused to clear him because of a dispute over financial compensation.

But the matter was finally resolved on Wednesday night, freeing Griffiths to play for the Jets in Saturday night's vital clash with the Western Sydney Wanderers.

New Jets coach Clayton Zane is expected the throw the 34-year-old straight into his squad for the Hunter Stadium clash.

"I'm very grateful for all the time and energy that the Jets, the PFA and the FFA have put in to get my clearance over the line," said Griffiths, who helped the Jets to the A-League title in 2008.

"Now I'm really just looking forward to getting out on the pitch and playing in front of our fans again.

"It will probably be a little bit emotional for me, but once I'm out on the field my only focus will be on giving everything I can for the Newcastle  Jets and helping the team get the result we're after."

Jets CEO Robbie Middleby, who had worked round the clock over the last fortnight to try and finalise a clearance for Griffiths, added: "It's fantastic news for everyone that Joel will be available to play on Saturday.

"It gives the team a big boost ahead of the match against the Wanderers and gives Clayton Zane another option in the attacking third.

"We're expecting one of our biggest crowds of the season on Saturday night and it will be a great opportunity for all our Members and supporters to welcome Joel back to Newcastle."

Griffiths is expected to start off the bench against the Wanderers but could form an exciting attacking partnership with marquee striker Emile Heskey.

The Jets will be looking to get their finals hopes back on track after dropping out of the top six after last weekend's 3-0 F3 Derby defeat to the Central Coast Mariners.