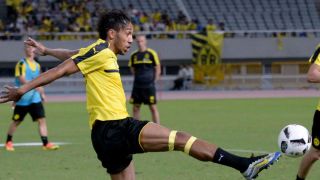 Aubameyang, who scored 39 goals across all competitions last season, scored Dortmund's second from the penalty spot as Gonzalo Castro helped himself to a brace.

But the stand-out moment came when highly rated French teenager Ousmane Dembele, a close-season recruit from Rennes, dispatched a stunning solo goal to make it 3-0 in the 57th minute.

Henrikh Mkhitaryan scored against the team he recently left to join United but, after seeing his club sign Germany duo Mario Gotze and Andre Schurrle over the past two days, Aubameyang believes things are looking up ahead of the Bundesliga season.

"We feel good," he said. "We started training three weeks ago and we feel very good.

"It was a good game against Manchester United and a great feeling. The new guys are really on form.

Next up in the International Champions Cup for Dortmund are Manchester City in Shenzhen after Pep Guardiola's team play rivals United in Beijing on Monday.

"It's the next game, we will see what happens against this team," Aubameyang added. "I hope it will be good like today."