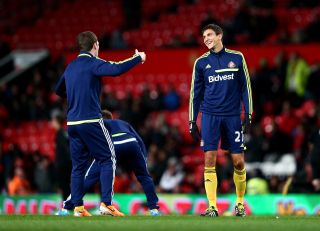 The Argentine duo were on the substitutes bench on Wednesday night when the Wearside club beat Manchester United on penalties to reach the League Cup final.

Defender Vergini and goalkeeper Ustari joined Sunderland earlier in the week and are set to feature against non-League Kidderminster in the fourth round on Saturday.

Poyet told Sunderland's official website: "They are going to make their debuts if everything goes alright until the game.

"It's going to be great for them to feel the stadium, the pitch, the football and the speed in a cup tie where we are the favourites and need to win.

"It will be a good opportunity for them and also for the fans to get their first impressions."

Poyet struggled to sleep after the high of Sunderland shoot-out success at Old Trafford and revealed he has been inundated with messages from across the globe.

He said: "The sleep was not long. It's interesting when you play a game how many people are watching and supporting you, the club and the players.

"There are so many people behind you and you don't realise that because you're concentrating on the game.

"There have been people from Spain, like former team-mates, then of course good friends from Uruguay.

"There have been friends and former players in England, too, so many people really supporting us which is great.

"I have had some time to text all of them back which is the least I could do."