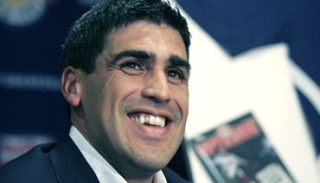 The new club, which will start playing in 2015, is jointly owned by Premier League club City and baseball's New York Yankees.

The 39-year-old Reyna, who hails from New Jersey, played 111 times for the U.S national team and featured for Manchester City from 2003 to 2007.

"Our commitment is to build a team that will win and will play good football that all New Yorkers can be proud of," said Manchester City chief executive Ferran Soriano.

"We needed someone to lead this in New York, a director of football, the most important employee.

"He is a New Yorker, understands New York football very well. He not only played in Europe but played for Manchester City and we are very proud to announce Claudio Reyna is our Director of Football," added Soriano.

Reyna, who is the new club's first employee, said the role was tailor-made for him and that he was thrilled to receive the opportunity.

"I think it is very clear that New York City deserves a team, needs a team and we aim to honour that in the highest way possible," he said.

Reyna had been working as U.S Soccer Youth's technical director and stood down from that position on Wednesday to take up his role with the new franchise.

"Claudio helped modernize the approach to youth player development in this country and put us on a path to success," said U.S Soccer President Sunil Gulati.

"We appreciate all his hard work and dedication. We certainly understand this is a unique opportunity for Claudio and his family, and wish him continued success."