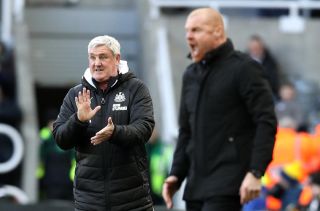 Steve Bruce emerged with mixed emotions after seeing his radical plan to address Newcastle’s goal-shyness fail to pay dividends in the way he had hoped.

The Magpies have now gone six hours of Premier League football without a goal after Saturday’s 0-0 draw with Burnley at St James’ Park with even a change of system and different personnel unable to end the drought.

Head coach Bruce said afterwards: “I was pleased with some aspects the clean sheet. When you change shape, you always worry that the defensive stability we have had remains and we pride ourselves on that especially at home.

“We’ve had 20 attempts, I think, which is far more than we’ve had before and to be fair to Burnley, the number of times they got a block in or a deflection or a challenge, you have to say well done to them to for the defensive show they put on.

“But there was a bit of it with which I was pleased. Room for improvement, of course like always, but I certainly thought that we were more of a threat and looked like scoring more.”

Bruce took a bold approach as he abandoned his three-man defence and opted for a 4-2-3-1 formation which included misfiring £40million striker Joelinton in a wide left position.

The ploy saw playmaker Jonjo Shelvey and frontman Dwight Gayle return to the starting line-up with Allan Saint-Maximin perhaps the most eye-catching absentee, although Bruce revealed the Frenchman had been left out after complaining of soreness in his hamstrings.

Ultimately, it counted for little as, despite impressive individual displays from Shelvey, Joelinton and Miguel Almiron they were unable to create enough good opportunities and passed up those which did come their way with only four of their 21 attempts hitting the target.

Bruce said: “Twenty-one attempts, you don’t often get that in the Premier League, I can assure you, and we have to take one. There lies our problem.”

Burnley boss Sean Dyche was pleased with the way his team – which is now unbeaten in six in the league – played as keeper Nick Pope kept an 11th clean sheet in front of England boss Gareth Southgate, but bemoaned a lack of creativity.

Dyche said: “I don’t think we got to grips with the game offensively today particularly in the first half, when we couldn’t find the moments you need to to win games.

“But defensively, on the other hand, we were solid and you get a clean sheet – I think that’s 11 for the season now – and it always gives you something to build on if you are keeping clean sheets.

“There’s a bit of frustration in the fact that we felt we could come here and win, but I’m not naïve enough to think it’s that easy against a side that, although there have been a few question marks, they’ve only lost three times here this season.

“But overall, another clean sheet, another point on the table and like I say, 11 clean sheets in that, which is a really strong marker for a side like ourselves.”