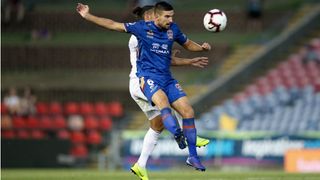 Goalkeeper Glen Moss was Newcastle Jets' hero as he saved a late penalty to rescue a 1-1 draw at home to Wellington Phoenix in the A-League on Thursday.

Roy Krishna had the perfect opportunity to seal the win for the Phoenix with the spot-kick two minutes from time, but he was unable to convert and the draw at least does no further damage to the Jets' top-six hopes.

The Phoenix shaded things in the first half and went mightily close to an early opener, as Mandi's 20-yard shot came back off the post and Louis Fenton put the rebound wide.

Although they were under pressure for long periods, the Jets reached the interval ahead – Ronald Vargas breaking the deadlock with an emphatic left-footed finish after evading a defender with some quick footwork.

The lead did not last, however, as the away side restored parity just before the hour through David Williams, who met Fenton's squared pass into the area and guided a shot into the bottom-left corner.

They hit the frame of the goal again six minutes later, as the impressive Sail tipped Daniel Georgievski's header on to the crossbar.

There was one final opportunity for the Phoenix when the lively Fenton was tripped in the box by Benjamin Kantarovski, but Krishna – who struck his penalty straight down the middle – saw his effort saved by Moss, meaning the Jets remain seventh, one place and eight points adrift of their opponents.