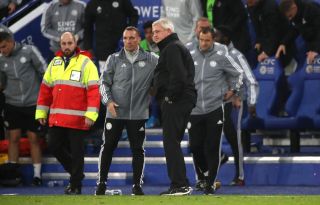 Newcastle head coach Steve Bruce was stinging in his criticism of his side following their 5-0 defeat at Leicester, branding the performance at the King Power Stadium “a complete surrender”.

The Foxes went ahead through Ricardo Pereira’s 16th-minute opener but it was Isaac Hayden’s dismissal shortly before half-time that was the catalyst for the Magpies capitulating after the interval.

Jamie Vardy scored twice, either side of Paul Dummett’s unfortunate own goal, as the visitors conceded three times in the space of 11 second-half minutes before Wilfred Ndidi completed the rout late on.

The result left Newcastle second bottom in the Premier League, with only one win from their first seven fixtures, increasing the pressure on an exasperated Bruce.

He said: “It was simply nowhere near what’s required. Ten men, nine men, the one thing you can show is a bit of resilience, a bit of determination, a bit of fight or a bit of courage.

“We haven’t shown enough resilience and that’s disappointing for me as I sit here because that’s the only thing that I genuinely demand of them.

“We have to apply ourselves better than what I’ve just witnessed there because it was a complete surrender too quickly and too easily.

“I’m not going to single out individuals but the whole team performance, the whole lot of them were nowhere near what’s required to go and make a fist of it in the Premier League.”

Newcastle captain Jamaal Lascelles was equally scathing as Bruce, telling Sky Sports: “(It was) terrible from the boys, it’s no-one’s fault to blame but ourselves.

“OK, we went a man down but we’ve still got 10 men on the pitch and leaking four goals is not good enough. It’s just not acceptable. We really do need to look at ourselves in the mirror.”

Newcastle’s travelling contingent were in buoyant mood long after the result became a formality but Bruce insists they must give their supporters something to cheer soon.

He added: “Too many felt sorry for themselves, yes, we made mistakes and we got badly punished but to react in that way was the disappointment for myself, the players and the travelling support, which was quite unbelievable.

“It makes the club what it is, it’s quite unique but we can’t take that for granted either. We need to give them something to shout about.

“Being a manager or coach, I ultimately accept the responsibility because it’s as bad an afternoon as I can remember.”

Hayden’s terrible follow through on Dennis Praet after the players challenged for the ball led to a straight red card for the Newcastle midfielder.

Bruce added: “I’ve got no complaints, the red card was a poor challenge. Maybe back in my day you might get away with that but in today’s game then I’ve got no argument.”

Leicester’s fourth win in their last five top-flight matches moved them up to third in the standings, two points behind Manchester City and seven adrift of leaders Liverpool, who the Foxes play next Saturday.

Manager Brendan Rodgers said: “It was an outstanding performance and result.

“Going down to 10 men can sometimes work for or against you but I thought how the players dealt with that and managed the game was outstanding because you need to be able to press the game and work arguably even harder.

“In the second half the players showed a wonderful appetite to do that. We pressed it so hard, were hungry in the game and hungry for goals. A clean sheet, five really good goals and a really good day for us.”