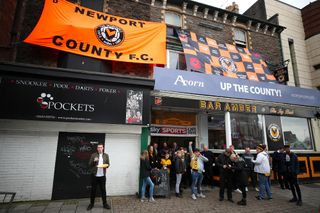 Gibson had only been appointed to the position in June after spending over six years in various roles at Stevenage.

“NCAFC can confirm that following an internal investigation, academy manager Jorden Gibson has resigned from his post and has left the club with immediate effect,” read a brief statement on Newport’s official website.

Newport launched an investigation after a complaint had been made against Gibson by a teenage player at the club, it has been reported.

Gibson’s duties at Newport included managing and coaching the club’s under-18 side.

Newport said they were unable to comment further at this stage when contacted by the PA news agency.

The Sky Bet League Two club currently sit second in the table and are unbeaten after their first seven league games.