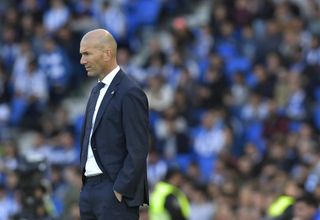 Zinedine Zidane has accepted his share of the blame for Real Madrid’s disastrous season.

Speaking after watching his side slip to a 2-0 home defeat by Real Betis in their final LaLiga fixture, Zidane, who returned to the Bernabeu to replace Santiago Solari in March, pulled no punches in his assessment of the campaign.

He told a press conference: “What happened this year has to be accepted. I’m to blame – we’ve had 11 games and won just 5. That is what it is.

“When a season starts off badly and then you are not playing for a trophy, I think it is hard to play well if there is nothing to play for. Motivation is a strange thing, it is part of our reality.

“During the week, it always seems like we are going to have a good match but in the end, it just doesn’t happen due to many circumstances.

Zidane has indicated he will overhaul the squad he inherited over the summer, with some big names likely to be casualties.

Wales international Gareth Bale has found himself at the centre of speculation in recent weeks, and his displeasure was clear as headed straight down the tunnel after he was left sitting on the bench.

However, Zidane would not be drawn on his future.

The manager said: “I don’t know what will happen. I’ve called upon other players lately. I’m making decisions about who plays and who is on the bench, but next year anything can happen.

“Today he didn’t play because others have come in. I’m sorry that he didn’t get minutes today, but next year who knows what will happen?

“I have to take decisions and when I don’t like things or something doesn’t seem right, I have to change them.

“Nobody is going to change what the player has done at this club, but day-to-day, it is like that. We live in the present, although we will not forget the past.”

If Zidane was looking to the future after the final whistle, opposite number Quique Setien was heading through the exit door, with Betis announcing his departure shortly after goals from Loren Morn and substitute Jese had sealed a famous win.

It was left to Jese to reflect upon a season which saw the club miss out on European qualification by nine points.

He told LaLiga TV: “The teams which manage to get into the Champions League or the Europa League, they need consistency, they need more points, they need to play well and maybe we have just let too many points slip away through our fingers, really.

“But that’s football. Football is about winning and to get into European competitions, you need to win.”