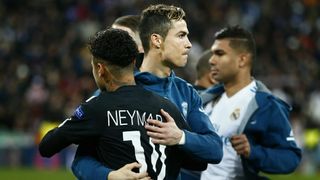 Paris Saint-Germain star Neymar thinks Cristiano Ronaldo's move from Real Madrid to Juventus will restore Italian football to the level of the glory days he remembers watching as a child.

Ronaldo enjoyed a remarkable spell at Madrid, scoring at least 40 goals in each of his nine seasons at the club to inspire them to 15 major trophies.

However, after seeing coach Zinedine Zidane step down in the wake of winning a third successive Champions League title, Ronaldo felt the time was right for a new challenge.

That brought about his shock move to Juventus for a reported €100million fee, a deal which has been considered something of a coup for Italian football.

And Neymar, who grew up in a period when Juve, Inter and AC Milan were all counted among the best in Europe, thinks Ronaldo's switch could be a turning point for Italy and Serie A.

"Cristiano is a great player, is a football legend, a genius, so we have to respect him. I'm happy for his decision, I think it was a difficult decision for him, and I wish him luck, but not against PSG."