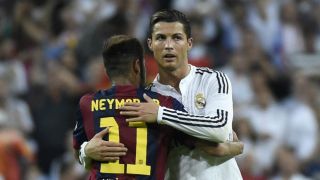 Ronaldo guided Madrid to Champions League glory at the expense of Atletico Madrid in 2015-16, before winning Euro 2016 with Portugal following a 1-0 win after extra time against hosts France.

He had to settle for second place in the race for the Ballon d'Or behind Lionel Messi last year, but Neymar believes the 31-year-old is favourite to lift the prestigious individual trophy this time around.

"Winning titles plays a big role in the race for the Ballon d'Or," Neymar told Lance!.

"Ronaldo won the Champions League and now Euro 2016 as well. So I reckon he is in a good position.

"Plus Ronaldo is a great player. I have no qualms in saying that."