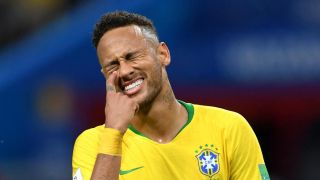 The criticism levelled at Neymar has become "too much", according to former Brazil international Gilberto Silva.

After recovering from a metatarsal injury just in time to make the trip to Russia, Neymar scored twice in five games as Brazil were knocked out by Belgium in the quarter-finals, though he was roundly criticised in the media for his histrionic reactions to challenges.

While conceding that the Paris Saint-Germain striker fell short of his own high standards, Silva believes Neymar, along with Lionel Messi and Cristiano Ronaldo, are held to higher - and sometimes unfair - standards.

"Until a certain point, I can understand the criticism [of Neymar]," he told reporters.

"But then it starts to become too much. I understand it, he's growing up. He has a lot to learn, and he's going to learn that. And I think because he's a big player, everyone wants to talk about the big player.

"If it was somebody else I have seen in the competition, they do some mad things, but nobody talks about them.

"But if it's Neymar or Cristiano Ronaldo it was the same, or if it was [Lionel] Messi. They pick someone for whom they can sell information [stories]."