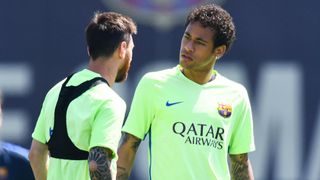 Luis Enrique has hailed the progress of Neymar during his three-year reign at Barcelona, but rued the lack of trophies in an impressive individual season for the forward in 2016-17.

Barca take on Alaves in the Copa del Rey final at the Vicente Calderon on Saturday, giving the head coach a chance of silverware in his final match.

Forward Neymar will be central to his side's hopes after a superb individual campaign which he has described as his best at Camp Nou since signing from Santos in 2013.

Luis Enrique agrees Neymar, who has 19 goals, has made significant progress in the mental aspect of his game under his stewardship, but regrets Barca's failure to win LaLiga or the Champions League to mark the campaign with top trophies.

"Neymar has evolved since I came to Barca," said Luis Enrique.

"You can see the maturity and the progress in his game, not in terms of his repertoire of skills but in his understanding of the game.

"He has had a great season, although players need trophies and this year they have been lacking."

Reflecting on a reign that has seen him win eight trophies, with a ninth available if Barca secure victory against Alaves, Luis Enrique loved the experience of coaching Lionel Messi.

"The trophies belong to all the team and of course the best player in the world," he said.

"It has been a pleasure to have the best; a leader in the dressing room and an example for his team-mates."