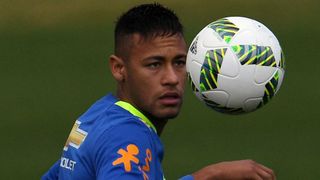 Neymar does not believe it is a problem if Brazil are over-reliant on him in their quest for Olympic gold because Barcelona rely on Lionel Messi.

The five-time world champions are looking to end their quest for Olympic glory on home turf at Rio 2016 next month and Rogerio Micale's side will look to Barca superstar Neymar for inspiration.

The 24-year-old was not keen to proclaim his own importance but happily admitted he finds himself playing second fiddle to Messi on a weekly basis domestically.

"I've never liked talking about myself, but I'll give Barcelona's example," he told a news conference at Granja Comary.

"We have great players but will we deny we are dependent on Messi? Of course we depend [on Messi].

"I'm not ashamed of playing for him or for the fact that he is the man.

"Messi is the best in the world, I want to depend on him."

Neymar was part of the Brazil squad that made their way the semi-finals of the World Cup on home soil in 2014, although he was sidelined through injury when a chastening 7-1 defeat from Germany abruptly halted their progress and sparked a vitriolic reaction from their supporters.

The pressure will be ramped up on the Selecao once more this time around but Neymar is ready to handle such scrutiny and believes his young team-mates can do the same.

He said: "Winning is a very good thing. The pressure is part of the football, I'm here for that. It's part of the game this pressure when I'm on the field.

"They [the other players] are young, but we know our responsibility of playing for Brazil in our home country, in the Olympics.

"I'm not concerned with that. Fear takes away the will to win. I'm not afraid of losing. If we lose, may it happen with pride."