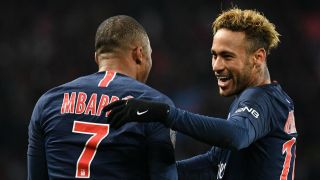 Brazil captain Neymar suffered a groin injury during the early stages of his country's 1-0 friendly win over Cameroon, while Mbappe hurt his shoulder in action for France against Uruguay.

The pair will not play against Toulouse in Ligue 1 this weekend, but Tuchel is hopeful they may yet recover for Wednesday when PSG welcome Jurgen Klopp's Liverpool to the Parc des Princes.

"With Ney and Kylian, right now, the good thing is that it's not very, very serious," Tuchel told a news conference. "But we do not take risks for tomorrow.

"They will not play, but there is the possibility that they play against Liverpool, it's possible.

"I think - and this is my opinion, I spoke with the doctor and the players - I think they can play."

Speaking in today's press conference ahead of Saturday's match against , said: "We will not take risks with and , tomorrow they won't be available. They'll possibly return for ." November 23, 2018

While PSG cannot afford to slip up in Europe, Tuchel is confident that he has a squad capable of dealing with the absence of two key men against Toulouse.

"I'm not going to say what we're going to do, but it's not the first time we've played without Neymar or Kylian and we've found solutions," he said. "It's our job to find solutions.

"We have a lot of top players - they have to show that they are ready."

Tuchel also has a decision to make in goal, where Gianluigi Buffon and Alphonse Areola continue to battle for the number one shirt.

"[The two goalkeepers] are completely different but at the same level," the coach said. "They have been great until now. We will continue with our plan until the winter break.

"I have to talk with Gigi and Alphonse and we have to wait to know who will be playing against Toulouse."