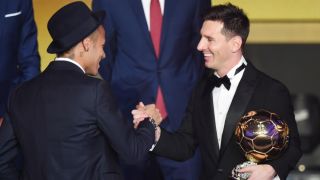 Neymar was not short of superlatives for his team-mate and now five-time Ballon d'Or winner Lionel Messi after the Barcelona forward picked up the award again on Monday.

The Brazilian finished third behind Messi and Real Madrid's Cristiano Ronaldo but said there was daylight between Messi and the rest.

"As far as I am concerned, Leo is from another planet," Neymar said.

"For me, Messi is the best in the world, he's my idol and I hope we can enjoy watching him for years to come.

"It's been one of the best days of my life, I enjoyed watching from the front row as Leo won and spending the day by the side of two of the best players there.

"I hope I can be at the ceremony again."

Neymar said he had asked Messi for advice on how to win his own Ballon d'Or, but it seems the Argentinean's response was rather simple.